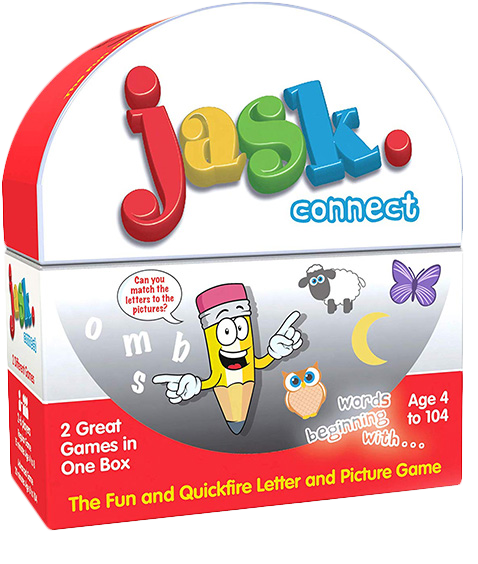 Jask Connect has two brilliant and unique games in one box, both games encompass quick-fire fun, teach the ages 4+ the alphabet, and later in life for the 8+ the art of spelling indeed it is a superb fun medium to entertain and amuse teenagers and adults alike. Not many games have the ability and longevity to appeal to children, teenagers and adults.

Jask Connect’s Regular Game is a very simple game where the first player to shout out the name of an object / picture beginning with a certain letter shown on the letter card wins the card, and after a series of rounds the overall winner is the player with the most cards at the end of the game.

Jask Connect’s Advanced Game is played the same way as the Regular Game, however in this game the cards are returned to the bottom of the deck and each player writes down the letter they have won in that round on the Answer Board provided and the first player to spell one of the Jask Connect pictures / objects wins the game.

Click button below to see how you can get yourself a copy and make your friends extremely jealous!!

If you love JASK, you can now play anywhere at anytime. What's not to enjoy!

Jask Connect has two brilliant and unique games in one box!